T. J. Dixon
While growing up in the Southwest, T. J. Dixon enjoyed color and loved to paint but frequently found this artistic medium frustrating. At the age of 26, while studying at an art college in Northern England, she picked up clay for the 1st time. “It seemed to come alive in my hands,” she says, “and I knew intuitively what I wanted to create.” She also knew that she wanted to become a sculptor. 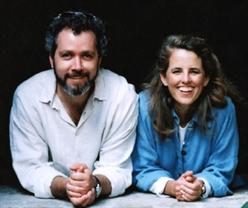 James Nelson
In 1991, T. J. began collaborating with James Nelson. A native of San Diego, California, Nelson got serious about art while in high school because, he confesses, “It was the only thing that I was good at.” At San Diego Mesa College, he studied with Dixon, and the 2 of them discovered that they spoke the same artistic language. In what Dixon describes as a “total collaboration” that required “a lack of fear and a leap of faith,” they joined their artistic talents and their aesthetic visions.

Working as a Team
“It isn’t that there are 2 different visions coming together,” T.J. explains. “We really are one when we design and sculpt.” Jim adds, “In a good collaboration, the trick is to set your own ego aside and let the needs of the project come 1st. When we listen to each other’s ideas, the project develops in a way that we could not have imagined at the beginning—and always for the better.”

Public Art
Although T.J. and James are frequently asked to collaborate with landscape architects in designing public spaces for universities, hospitals, and municipalities, they are primarily figurative sculptors who create public art—often life-sized figures 1st formed in clay and later cast in bronze. T.J. points out that Americans spend billions of dollars every year traveling around the world to seek out and admire “the icons that give us a sense of where we have been and where we are going to as a culture.” She and James have made it their mission to create similar icons for special places that are much closer to home.
Register for Classes
Report an Issue
Current Planning Projects
Community Voice
Agendas & Minutes
[]